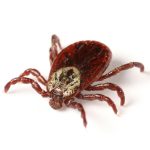 Ticks are not insects, but arachnids. Like their close cousin, the spider, ticks have eight legs when they reach maturity. Ticks are born from eggs, advancing then to larva, nymph, and adult stages by molting. They survive on the blood of mammals, amphibians, birds and reptiles. North America is home to portions of two families of ticks, known more simply as hard ticks and soft ticks. Seven of the fourteen genera of hard ticks reside here, as well as all four genera of soft ticks.

Many species of ticks are present in Missouri, but the most common are hard ticks called the lone star tick, the American dog tick, and the deer tick. Lone star ticks are known for their aggressive nature, often traveling long distances toward a potential host, as ticks crawl rather than fly or jump. Ticks are most active from April to July.

Each species is different, but all nymph and adult ticks have eight legs and an ovular body structure. Larva are the size of poppy seeds with eight legs. Once adults, they become the size of a sesame seed. Lone star tick females can be recognized by the white dot on their backs, while adult American dog ticks are dark brown in color.

Visit our Pest ID Library to Learn More About Ticks

Ticks are second only to mosquitoes in their ability to transmit human diseases, and they are the first in transmitting disease to wild and domestic animals. Any tick bite can be dangerous. They can pick up and spread pathogens like protozoa, bacteria and viruses. The most common diseases transmitted by ticks are Rocky Mountain spotted fever, Lyme disease, and ehrlichiosis.

If you regularly walk through uncut fields, brush, or other woodsy areas, make it a habit to check your skin and clothes for ticks. Light-colored clothing may help you more easily detect them. You can also reduce the risk of ticks around your home by keeping the lawn cut and hedges trimmed. Sunlight is your friend, so make sure you’re removing fallen leaves and brush from the ground. Also, keep your firewood neatly stacked to prevent an infestation. If you find yourself with a tick latched onto you, the best way to remove them is using tweezers. In order for the tick removal to be 100% effective, you need to ensure the head of the tick has been completely pulled out along with the rest of the body. Once removed, wash your hands thoroughly as well as the affected area and apply rubbing alcohol to sterilize. To ensure the tick does not return, place in a sealed container and freeze.

Steve’s Pest Control will come and do an on-site tick control evaluation of your property. We’ll examine the size of your yard and the kind of vegetation you have growing there. If you have pets, we recommend flea and tick preventative treatment given on a regular basis. Based on the level of tick control you’re looking for, we’ll spray and treat the ground for ticks, and create a plan for continuous treatment.

Have a tick control problem? Steve’s Pest Control can take care of it. Contact us today.